Cohabiting couples should not be given the same legal rights as married people, an influential think-tank will say today. The Centre for Social Justice - set up by former Tory leader Iain Duncan Smith - claims the change proposed by the Law Commission would 'fuel family breakdown'. The CSJ wants a shake-up of the law to strengthen marriage.

The group argues that this would combat social problems, as children of families that split up are more likely to do worse at school, suffer poorer health, fall into crime or drug abuse and be unemployed. Fathers will also get new rights to see their children after a divorce and grandparents will be allowed to remain in contact with their grandchildren if their parents split up.

Mr Duncan Smith said the report was 'timely' because of public concern over the case of Baby P, the 17-month-old toddler left to die in a bloodstained cot after suffering unimaginable brutality at the hands of his mother and her live-in boyfriend. He said the case 'shone the spotlight on the chaotic nature of family life' in the poorest parts of Britain and proved the urgent need to shore up traditional relationships.

'This review is working from an underlying assumption that marriage should be supported both in government and in the law and that, related to this, fatherlessness - or motherlessness - should be avoided,' he said. 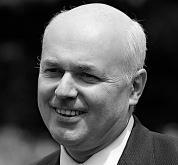 Former Tory leader Iain Duncan Smith founded the Centre for Social Justice - photo by Steve Punter 'Policy can and should be focused on stemming the tide of relationship breakdown. Marriage acts as a stabiliser and a signal. Married couples are far less likely to break up than couples who live together without getting married.'

The Centre for Social Justice (CSJ) - whose ideas have influenced Conservative leader David Cameron's family policies - was publishing a raft of proposals in its report The Family Law Review. They include making pre-nuptial agreements - popular in the U.S. among celebrities and the super-rich - legally binding. The contracts set out exactly how money and property is shared out if a couple end their relationship.

Under the current laws - opposed by senior members of the judiciary - judges can only take 'pre-nups' into account during divorce proceedings, and can't be tied by them. But the legally questionable status of pre-marriage agreements deters couples, especially the wealthy, from walking down the aisle. Experts say it would also spell an end to costly legal battles such as the £10million divorce of Sir Paul McCartney and Heather Mills if England and Wales were brought into line with other countries.

The interim report - which will be finalised next year - would urge the Government to promote 'marriage preparation classes', run by churches or charities, which couples would attend to make sure they were ready for the challenges of tying the knot. A string of family relationship centres would also be established to prevent divorces ending in acrimony, which could damage children.

The CSJ also rejected proposals to give cohabiting couples the same legal rights as married people, warning this would 'fuel family breakdown'. The Law Commission wants people to be allowed to claim financial support from partners if they had lived together for a set period of time, a so-called common law relationship.

But the report said: 'While doing much to address perceived injustices, these proposals are obviously not compatible with a long-term national policy aimed at improving family stability by encouraging marriage and discouraging markedly more unstable cohabitation.' The average length of a marriage is 11.5 years compared with just two years for a live-in relationship.

One in four children in Britain live in single-parent families, according to the largest survey on family life. Studies in the U.S. have showed these children are up to six times more likely to suffer abuse. For a decade Labour has maintained that families of all kinds are equally good and marriage is merely a lifestyle choice.

As Chancellor, Gordon Brown abolished Married Couples' Allowance in 1999 and introduced tax credits that reward single mothers over couples. But David Cameron has taken a stand for the institution of marriage and pledged to introduce tax incentives to encourage couples to marry or stay married.

Decades of studies have found that children of divorced or separated families, and children of single mothers, are likely to do worse at school and suffer poorer health. As they grow up, they are more likely to fall into crime or drug abuse, to be unemployed or poor, and to become single mothers themselves.