Being a Self-Repper - or 'How I stayed in Charge of my Own Proceedings in a Family Law Case and got Fairness in Court - Without Huge Legal Bills'... Linda Franklin writes the concluding part of her story.

I wrote the piece above in October 2008, just after that set of proceedings. Six or seven months later, however, my ex said his income had reduced due to the recession - and was applying for a downward variation. Having just gone through a couple of years preparing for and doing litigation I felt very downhearted at the prospect of dusting off the old files and gearing myself up again. Nevertheless, I wouldn't dream of doing anything other than self-repping.

I've now had quite a lot of experience of all this: solicitors did our divorce, we then had solicitors and barristers doing a variation of the Order brought by him, then we had solicitors and barristers for the proceedings above which I brought as a variation. There was one barrister for the First Appointment, another of a higher calibre and price for the FDR, then my ex had a legal team for the Final Hearing and I was there as an 'Applicant in Person' - as it's called. The last lot of fees up to FDR cost me £15k I'd love to have now. Rule of thumb is reckon to double that amount on the stretch from FDR to Final Hearing. It's a lot of money when it's coming out of resources you need for single life. Moreover it's wasted if some or all the evidence you've carefully collected and gone through somehow isn't properly conveyed to the judge in the way you'd like it to be. So I knew I'd be doing it myself - and I'd only have myself to blame if it went wrong - but at least I'd have no legal fees to pay. However, I also knew it would be very stressful and hard work.

And my first problem was having to go through the horrors of the Form E without the help of a solicitor who had a magic Form E you can type on. But it was when  I googled 'Form E' I found the wonderful Wikivorce website, which not only had a Form E you could download then type on and which grows with the information, but there was a marvellous family law barrister - Amanda - who gave advice about how to do it and what was expected.

With her kind, sensible advice in my mind I found myself far less overwhelmed and able to take it step by step. I no longer felt I was at sea at each stage, but could look on the website for advice and reassurance any time I needed. There would either be an article that explained things, or someone else would have asked already what I wanted to know - or I could put a direct question myself.

This is very empowering because it leaves you in control: vital when your life is out of control. You can decide what is and isn't helpful to your case to put in and leave out. And you don't have to deal with a solicitor and barrister at each stage - which can be quite wearing in itself. Litigation is a high stress activity and what can make it even more so is waiting around for the phone call or email from your solicitor  when you can sort the particular problems that need sorting. Cut out the middle man and you can do it yourself, in your own time as they come up.

Moreover, self-repping cuts down the amount of accounting of yourself you have to do if professionals are involved. The fact is everyone comes with their own baggage - professionals included. I suffer chronic illness and am also a 24/7 single mother because my ex is abroad: very hard to get across what sickness and solo parenting can do to your career prospects to a healthy, youngish Alpha male who's never suffered more than a cold in his life and has a wife and/or nanny who takes care of the children. And - just as daunting - was a female barrister who told me resentfully - that she'd had to manage on her own (albeit in robust good health)...

These are all energy-sapping barriers avoided by self-repping. Because this is all about judging, you inevitably end up feeling judged by your legal team when you put your case to professionals. Putting your case to a proper judge - with all the evidence - you only have to do it the judge. That cuts out a lot of stress and time. Moreover in self-repping you yourself are motivated to put together things a solicitor might not find worthwhile or justifiable for the time and therefore money involved, or because it's an area they don't really like to go. But if there's been - for instance - litigation misconduct or poor financial conduct on the other side and you're willing to find out what counts and do the work to build your case, you can point it out and so strengthen your hand. It might even lead to an early resolution.

I noticed that solicitors - naturally enough - do the job strictly according to the court timetable and what was due to be done there and then. They talk about keeping their powder dry. There is demarcation of what a solicitor does and when and what a barrister does and when. You're only one of several clients and the practice's business needs obviously calls for you to be kept on board paying as you go. But it might not always be the most effective way in terms of getting it sorted and over. While you take up a relatively small part of your solicitor's attention, the whole business lasting months can be really draining and worrying for you: your future welfare and that of your children hangs in the balance.

So I decided this time round to not 'keep my powder dry' - which meant often in practice it wasn't used as it was left behind or forgotten on the day. But instead to follow the journalist's maxim - that is what I am, after all - which is: 'Put your best strawberries on top!' I took the time from the beginning to put down as succinctly as I could - on the Form E and my questionnaire - what I thought was relevant. In effect I outlined my case at the start.

I did this in good faith because I am not a professional - and the judge at First Appointment simply took a bit of extra time going through my questions saying this was allowed, explaining that was argument, that was cross examination and so on. But - crucially - it gave my ex a very good idea of what would be brought up in the future. 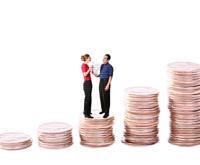 The man who'd never negotiated in the past suddenly wanted to do a deal as soon as we got outside the court room! He too had run out of money for legal fees and there was this time - as there had been before - no solicitor at his side telling him not to do a deal: a policy which had cost him so much in the end. So we did a deal we knew was realistic without anyone interfering, shook on it, told the receptionist and were back in the court room telling of our new agreement to the beaming judge who was still writing out directions. Maybe self-reppers doing it in a way that seems right to them - if a little unconventional to the professionals - might speed things up with less cost in terms of time, stress and taxpayers' money (court time is expensive). The legal system is there to be fair to and for the people it is designed for after all.

My advice to anyone willing to put in the effort involved is do it yourself and learn how to approach the court without being too daunted by taking the appropriate advice available from Wikivorce and other places. My intention is that I don't want to rip anyone off - or be ripped off. I reminded myself that at the bottom line I was simply asking a wise man or woman to sort out something that's fair to everyone - as people have since time immemorial. I believe if you tell your truth the best way you can the chances are you'll get that fairness. And you keep the £15-30k it typically costs.