Postcards from Splitsville is a unique child friendly website where children of divorcing parents are invited to create anonymous postcards to express their feelings about the divorce and share them with others.

CARDS THAT SHOW HOW MUCH CHILDREN CARE

Kids who want to submit a postcard can print a downloadable, pre-addressed postcard from the site and send it in. Parents are encouraged to look at the site to see first hand the effects that divorce has on their children. The site was the brainchild of Kara Bishop, 44, a graphic designer from Tucson, Arizona. Kara who has no children of her own, grew up in an intact family and her own divorce was amicable but it was the experience of the son of a close friend that sparked her interest in the effects of divorce on children.

“I was disgusted that anyone would shame a child for loving a parent and started looking into how I could help him. Together, we came up with a set of rules (which I have since expanded on with the help of other children in his situation) and turned it into a small hand-book of post-divorce rules for parents. Simple rules like "don't put me in the middle" and "don't call each other names".

While she was sharing this work with various professionals, Kara met Dr. Frank Williams the creator of a 30-year-old non-profit organisation in the USA called Divorce Recovery, which has a special children's group.

“Ultimately he invited me to take his classes and join his organization of which I've been a part now for 3 years. In addition to being a board member, I also help facilitate the 10-12 yr. olds in the Children of Divorce group, an 8-week program for which the Postcard exercise was created.” “We do this exercise early in the Children of Divorce group when the negative feelings are high, this has produced some very raw and touching postcards for the site.”

The idea came about after Kara found a site called PostSecret.com. This site, set up by a man called Frank Warren, invites adults to share a personal secret through an anonymously sent postcard. Postcards from Splitsville has been developed with Frank Warren’s blessing.

“The kids didn't always feel that their parents listened to them or sometimes they were just afraid to ask for what they needed (more time with the other parent, for example, can be a dangerous request). So I thought a similar postcard site/exercise would be a great way for the kids to safely share how they felt with their parents in a non-direct way while helping others who happened upon the site too.”

“Some kids were very concerned that their parents would recognize their handwriting so we brought in magazines and cut-out letters to help assure their anonymity. A sad fact that I've learned is that many kids who have seen a parent "fired" from the family are very afraid that there's something they could do that would lead to them

being fired too.” Kara says that although it is a "for kids" project - a great venting tool for the kids and a great site to help them feel they're not alone – it is the parents that she really wants to visit the site. She hopes it will help them recognize some of their harmful actions and hopefully become aware and change their ways. “If a parent were to change their behaviour that would make the child's life better, which ultimately brings it back to being a "for kids" site.”

“As well as the children doing their own postcards, each child gets assigned a card from the site and attempts to explain what they think the author was feeling to the rest of the group which opens up great "me too" discussions amongst the group.”

Every postcard on the site is special but Kara has picked out three that mean a lot to her:

"I was daddy's girl until the divorce. I went with mom" 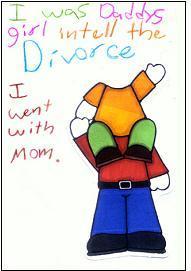 “This one haunts me for 2 reasons. 1) it happens that I am a Daddy's girl and when I think about what my life would have been like seeing my dad every other week, I literally shudder and 2) since many of the postcards are from my groups I can sometimes match up the cards with the kids (a few kids share their cards with the class, but most of them go directly into the "mailbox") this one I was able to match up and it was from a quiet, sad little girl who knew her dad cheated on her mom and felt she therefore needed to "side" with her hurt mom. That much I know. But did she give up her daddy's girl identity willingly, did her mom encourage her to, or was it taken from her by her dad when she went to live with mom? Like I said, haunting.”

“We try to help the kids know it's OK to continue loving both parents equally, but I don't think we achieved that with this young lady sadly.”

"It was time for my dad to go"

”This one kills me too. The judgement, the finality. It makes me wonder how much adult info those kids have been exposed to and how their struggling to process it with limited life experience, trying to understand things even adults find hard to figure out. If you look close, the father's head is hung in shame, so sad.”

"How divorce feels to me"

”So simple, so raw, and so many of these kids feel torn in half, a theme that comes up again and again, but this one has the "me" circled with arrows as if maybe nobody notices her pain. Another theme that comes up again and again is parents that are too busy dealing with their own divorce problems to notice/have time to deal with their kids' issues.”

Just under 100 postcards have been sent to the site since it started some 2 years ago and more than 14,000 people have visited it. Kara says: “I usually get short little comments, like "heart-wrenching" or "eye-opening" or "I wish there was something like this when my parents divorced"

So far the project has been largely confined to the USA. Kara is working with kids on the Children of Divorce program to complete her book of rules for divorcing parents – and using postcards from the site to help illustrate why they are important. Now she hopes children – and parents – all over the world will start to benefit from Postcards from Splitsville.

“Unfortunately the break-up of families is an event experienced globally. If the price of postage is prohibitive, kids can create their postcards, scan them or take a digital photo and send it to the site.” ”I've got a long way to go as far as letting people know the site exists, thanks to you for helping me spread the word. And as for parents learning from it…. a gal can dream.”