The Opportunities of Divorce

For our 30th wedding anniversary Martin and I went on a trip of a life time to India. We went as independent travellers and when I researched the trip I found out about a charity called Children Walking Tall. I thought then, that when I retired or if I won the lottery I’d love to work there as a volunteer.

A year later completely out of the blue Martin told me he was leaving me and wanted a divorce and he left. To say I was devastated doesn’t begin to explain it. We had been together since I was 16, that was 36yrs. We did everything together, and he was still telling me he loved me just a week before he left. The day he walked out he told me there was nobody else involved and that he had been unhappy for years. I didn’t understand what had happened.

Two weeks later just a week before Christmas I found the phone bill. He’d been having an affair for three months with a woman he worked with. She knew me and knew he was married, but in the end it was him that was married and that had made the commitment to me. I discovered Wikivorce the night before Christmas Eve 2007 and we’ve been together ever since. Without a doubt it, and some of the great people on there, have helped me through some of the darkest times.

I wanted to run away from my life as it had become. I live alone in the country and the silence and loneliness were overwhelming. I remembered Children Walking Tall and applied to work with them in India after speaking to my boss about a career break. I have worked as a nurse and lately as a manager in the NHS for what feels like a 100yrs and never had a break. I deserved one!

The charity helps and supports children and their families who live in two slums near Mapusa in Goa. They are completely funded by voluntary donations. I was accepted in April 2008 to work from September to the end of November and then I put it out of my mind. I had an e-mail asking if I could go earlier, during the August monsoon and at that point I thought I should start planning. I was terrified; I’d never been further than London on my own, never been on a plane alone and had no idea how I was going to cope.

My son took me to Heathrow and as I left him to go to the departure lounge he gave me a big hug and told me how proud he was of me. I took a big gulp and headed for the plane fighting back the tears. The next morning I found myself in Goa, alone and with no idea of how it would work out. The only thing I did know was that nothing could be as scary as those three months after my husband left. That turned out to be true, from the minute I walked into the charity I knew I’d done the right thing.

I got a taxi to The Mango House that morning and walked in at 9am having no idea what time I should start or what I was going to be doing. Rob, the director looked up from his desk and said “Hi, you must be Sally, do you want coffee?” I was a bit shocked, this was a huge thing for me and you’d have sworn I’d just popped in from next door!!!

He said as I was early (work started at 10am but nobody told me) I could go with Ali to the slums and pick the kids up. So off I went, the kids were great fantastic, the slums, particularly in the monsoon were very grim. Cross Roads slum has a squalid black rank stream running through it which you have to walk through to get anywhere. It was hot wet dirty and disgusting.

As a volunteer I worked hard all day, 5 days a week. Like any job you have to commit to it and put everything into it. You don’t get paid but the satisfaction and fun you get is worth its weight in gold. Walking in to work and having 30 kids run to you and wanting to be with you was just what I needed. I needed them as much, if not more, than they needed me. 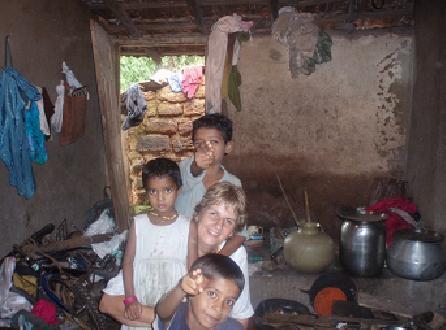 The routine things such as reading, singing, and showering the kids, as well as providing clothes and fantastic nutritious food was part of everyday life, As was ensuring they got an education and had the medical and dental care they needed. When the kids were off school for Diwali we also got to do special trips. We took them to the park and had to teach them to climb the ladder to the slide, how to use a swing and how to take turns and work together. A see saw doesn’t work when you all sit on one side!!! They are so used to fighting for themselves they have no idea about helping each other and working as a team. We also took them to the beach and played in the waves and to a safari park. All things they would never have done. Leisure time and play time is not something that slum children are usually encouraged to have. We all had so much fun and even Ali, the housemaster, who had been brought up in a slum was like a child at play. He had also never had those experiences either.

As a volunteer, I had to first find somewhere to live, and eventually found a great place above a local family home just a minute from the beach, I learned to shop, to negotiate rats snakes and lizards, packs of wild dogs and Indian male tourists without anyone to call for help. I found “F off” worked better on the men than the dogs and rats!!!! I used local buses for the 2 hour journey to and from work every day and that was an experience. I got pushed and shoved., squeezed in to a space which only seemed big enough for a mouse with what felt like hundreds of others, I got touched up and had my bum pinched. I guess at my age I should have felt flattered! 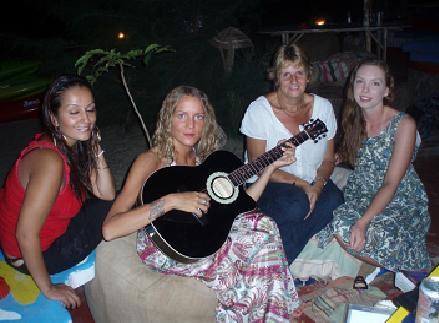 On weekends we abandoned all idea of good work and indulged. We had weekends away in beach huts, pedicures, massages, we swam and did some scuba diving and partied on the beach. Going home was looming and I didn’t want to. I managed to extend my stay a little but was told I had to be back in work by the 1st December 2008. So I booked my flight to Mumbai and was advised by my friend Cameron to go for dinner at the Taj Mahal hotel that evening as it was safe for a woman on her own so I booked a table for dinner and hotel nearby.

I flew on my own into Mumbai during the November terrorist bombings. The Taj was under siege and they were holding British and American hostages.

The airport was deserted as most airlines withdrew their flights. I had no insurance and couldn’t risk losing my flight the next day and I wasn’t aware the British Embassy had advised against all travel to Mumbai. With my few words of Hindi I managed to explain I had nowhere to stay and the airport staff were fantastic. They found me a safe hotel used mostly by Indian nationals and a few of us, including a Bollywood movie star, who were all thrown together by the tragic incidents in the city, spent a great evening together. Late that night a tall attractive Indian man approached me and asked me to dance. He gazed into my eyes and told me “For it is written in the stars we will spend the night together” I looked up at him and replied “Sorry, we must have been reading different stars!“ and at that point I said my goodnights and left as it was about 2am. Have to say though; it was an interesting ending to a fantastic adventure and gave my self esteem a boost! On my return home I had an e-mail from Cameron, it just said F*>%.........have I killed you!

The next day as I boarded the first British flight out of Mumbai I realised just how lucky I was to be going home. 173 people never got to go home again and at least 308 were injured. On our flight were some of those who had been held hostage and they were very traumatised. As the plane arrived at Heathrow we were surrounded by police and the media and again it was brought home to me how lucky I had been. So I arrived home with a very different view to the one I had as I left Heathrow on that August day.

I have to say a huge thank you to all the other volunteers especially Monica Helen and Jo and to Rob the director of CWT for everything they have done for me. You can never give as much as you get back. Mostly I have to thank the children; some have chronic illnesses, such as TB, Malaria and Leprosy. Others have suffered abuse in all forms, have been child workers and even been married off at the age of 12 and 13. Whilst all have live in poverty, not knowing when they will eat again.

I went to India in bits but one thing I’ve learned is that if those children can smile, despite their terrible existence...

My life now is not the one I would have chosen, but I’ve had some cracking times and lots more to come...

If you would like more information go to ChildrenWalkingTall.com