It was a very big day for Michelle, her first ever experience of Life Coaching, her first introduction to Collaborative Law, and her first chance to be made to feel special and have some great photos that reflect the beautiful lady that she is and the person she is striving to become, because of her situation rather than in spite of it. But let's see what Michelle discovered on that Thursday 19 November 2009. 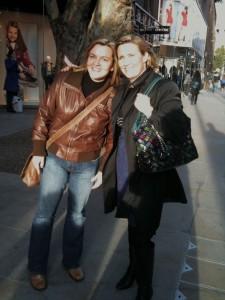 "Each if the three elements together has made me feel so much better about my situation. "Let me start with Julie and the life coaching. To say I had my reservations with regards to just how much this would help me is an understatement. I always viewed life coaches in general as something only the rich and famous would subscribe to. I think if someone had suggested I sign up to a life coach at the beginning of the divorce I would have viewed them slightly dimly. "That said after one session with Julie I feel renewed with a sense of being back in touch with myself, the true being, who was very lost, a long time before all this horrid process began. I discovered parts of myself I believed were gone for good and I had no clear path to the future nor believed I had a future. I was so wrapped up in the now and dealing with issues that hit home on a relentless and daily basis.

"To be able to step back from that view over my own situation has given me clearer thoughts over my life as a whole. I felt I live with the pain, anguish and fear of not having enough money, to meet any of our current needs. I realise that this issue is ubiquitous and I needed to transform our life into a better place. I just couldn't see a way forward. Having worked on a plan with Julie's expertise I propose that returning to education would be the way forward in utilising my current skill base into a real world career. I felt like I’d lost my grounding in myself, the person and my world as I knew it. I often complained to close friends that “I feel like I’ve woken up in someone else’s life” despondent and dispirited I’d lost my internal balance but mostly I’d lost my drive. Clear thinking, clearly seeing the goal and how to get there, in a clear vision - evaded me. I can now see a way forward along with a vision of how I would like our life to be in the near future.

I have transformed my view of life coaching to something along the lines of - "If you value yourself, you close family and all those of any importance around you, you will make this worth while investment in yourself, your future and how and where you want to be. Without which you simply loose control and drift on the turbulant sea of divorce and everything that it will throw at you. I couldn't recommend life coaching any more highly, I feel like some evangelist and feel everyone should subscribe to it at any difficult point in their life. "The difference it has made to me and all those around me is priceless." After seeing Julie Jones for a coaching session, Michelle was introduced to James Pirrie of Family Law In Partnership......

In a word AMAZING... collaborative law is 'the' way forward. It takes a look at the divorce as a whole and not by breaking it down into the seperate elements of: the divorce, the finances and the children - as separate issues but quite rightly as a whole. I realise every divorce is differing in its content and issues, however the weight that was lifted off my shoulders that there was someone who could finally see the problem as a whole, rather than the separate elements, was more than a comfort to me and to my situation. A proposal has been put in place and sent over to my husband's solicitor which I not only view as fair, but which finally gets down to the nitty gritty of solving the problem of our divorce in the best interests of all those involved.

"Mediation has also been recommended and having been through it once before but due to a change in circumstances everything agreed fell apart, I would look forward to entering into it once more. Being unbiassed and by not being on either parties side I feel it is an essential part of the process of divorce. I personally found mediation a win-win situation as financialy the more aspects you can discuss in a safe environment with an objective view of a third party, and sort it out without dragging it through the courts, then better the financial situation all round. I felt I had some control over the financial aspects as well as access to the children, where I feared going into court would rather be like tossing a coin and the outcome would be unknown and a 'one fit for all' and not a 'best fit' for our personal circumstances." The photoshoot...

"Having always naturally being more comfortable behind the camera on an amature basis, I felt this was an ideal opportunity to get some decent photographs of myself. I realised during my marriage there weren't many photographs of myself as I was always the one who would be taking the pictures. To have a camera pointed solely at me was unnerving but really enjoyable. I now have a snapshot of a wonderful adventurous day spent in London along with some sound advice and beautiful images."

“I'm feeling much stronger recently due to all of the elements working along side me. I feel ready to take on the world, let alone the divorce. I feel very honoured to be part of this process." Read the full version of Michelle's SOS Makeover here..... Julie Jones, the creator of "Changes Forever", James Pirrie of Family Law In Partnership and Scott Collier, will be exhibiting at the Starting Over Shows in March 2010.

To see a video snapshot of that big day, take a look at the short film below.....