What do you do when divorce breaks those future dreams? When you have to let go of those plans you shared...? Having received my Decree Absolute on my 50th birthday last Christmas, the house sold, the assets split... I decided that my future is in my own hands. The world is out there and, if I want to see other parts of it, it's down to me to make it happen.

For someone that didn't leave her own country until the age of 20, I'm relatively well travelled: I know Britain like the back of my hand; have wandered around a fair few European cities and relaxed on many Mediterranean beaches; sailed around on the Atlantic, the Pacific and the Indian oceans... so where to go now?

A good friend of mine emigrated to Sydney 20 years ago and has been trying to persuade me to visit for the last 15 - so, off I went.

I looked at the exotic itineraries of Qantas, Emirates, Cathay Pacific, British Airways and decided I'd like to see Hong Kong too - so I duly booked my ticket with Cathay (just over £1000 round trip) and decided to make my own way to Heathrow. Since I was due to fly out at the end of March, by March 1st I thought I'd better start getting organised. No sooner had I reserved a seat on the Friday evening shuttle from Manchester to London (almost straight from school!) than British Airways announced an impending strike! I waited it out, checking every day for the last few days - after a short delay in Manchester, I was airborne - on the only evening shuttle to fly in several days...

I stayed overnight at a Heathrow hotel; I wanted to be fresh for my big trip the next morning. Deciding to pop into 'Wikichat', I stayed nattering to the regulars until 4am... needing 4 early morning wake up calls to get me out of bed! Looking like death, I arrived at the airport in good time and settled down to do some shopping. Right on time, we left London - bless Cathay Pacific - I was so excited, like a little kid on a jumbo jet. I remained excited until... well at least Finland... then I got bored. I fidgeted my way through the 13 hour flight (to the young lady sitting next to me on the plane - I'm so sorry...), arriving, somewhat less excited, in Hong Kong at 7.30am local time. I didn't see Kazakhstan, I didn't see China... I was gutted I missed the Himalayas. But I did see the sun rise over Hong Kong harbour - beautiful. 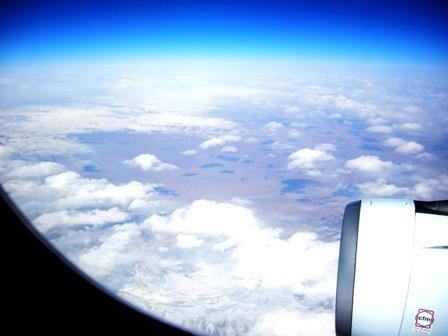 I say local time because I had set my watch to Hong Kong time to combat jetlag (no idea how that helps) and knew that the clocks had moved forward to BST in the UK about the time I was flying over China. It hadn't occurred to me to enquire how long the flight was from HK to Sydney (it's 9 hrs) so I was more than a bit confused. In trying to work out the time back home (so I could ring my family to let them know I had landed safely), keep my eye on the time in HK (so I didn't miss my flight) and work out what time it was in Sydney (so I could let my friend know where I was up to), I became more and more confused. Perhaps it was the fact that I was short on sleep, perhaps it was genuine jetlag (is it a real condition?!) or perhaps I'm just a daft old bat, but trying to understand time zones and where I figured in them almost reduced me to tears of frustration. Hong Kong airport is the quietest airport in the world - seriously - and (to the lovely man in the coffee shop) that idiot who was wandering around muttering out loud about times was me!

I didn't leave the airport and I was too tired to shop some more - so I went to the gate as soon as I was able and waited. I had to keep pinching myself to make sure I didn't fall asleep. To those of you unaccustomed to long-haul flying... I do NOT recommend two of them back to back! Next time I will stop over somewhere. But there was something rather romantic about flying over the South China Sea. Cabin crew try to make you close the blinds but I just kept opening it again. "There is nothing to see Madam" she tried,... "It's the South China Sea, dammit!" I told her. She gave up and left me alone... I'm obviously more trouble than I'm worth! More fidgeting, more films...We landed in Australia just in time to see the end of the day and the sun setting serenely over Sydney harbour. What an exotic few moments in an otherwise incredibly boring journey...

I don't enjoy queuing at immigration; I did enjoy hearing the Aussie twangs of the airport staff's accents. I was duly collected by my friend and a limousine and driven in style across the Sydney Harbour Bridge, gasping in awe at the Sydney Opera House to the extreme smugness of my ex-brit-now-Aussie mate.

More in next month's issue!