Terry Miller came to prominence when, as part of the team guided by Gary Rhodes, he won ITV’S Hells Kitchen in 2005. He is a larger than life Chef whose character is firmly embedded in his Newcastle roots. Terry has very kindly offered to share some of his own recipes with Wikizine readers. 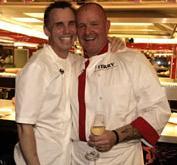 Following Terry’s successful appearance on ITV’s Hell’s Kitchen, where he remains the only general public winner to date, he has appeared on Good Food Live, GMTV, Through the Keyhole with his hero, Sir David Frost and recently presented the highly successful ‘A Bite of History’ series on the ITV regional channel Tyne Tees, where he cooked dishes from the Roman, Viking/Anglo Saxon, Georgian and Last Generation era’s.

‘A Bite of History’

Terry recently presented the highly popular historical food series ‘A Bite of History’ for Tyne Tees Television. Over the four programme run he researched, cooked and presented food allied to the north east of England during the Roman, Viking/Anglo Saxon, Georgian and last generation periods of the area. Terry particularly enjoyed taking the unusual dishes out into the street to test on the general public and getting its reaction to food they would not normally experience.

As a result of the popularity of this series the final programme has been submitted to the Royal Television Society for consideration in their annual awards honours. 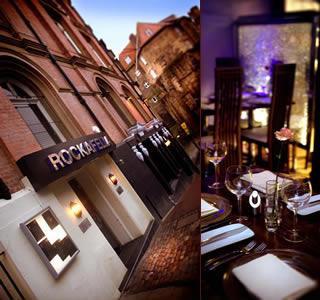 There cannot be many people who would feel comfortable offering a dish to Gary Rhodes which contained instant mashed potato but that was exactly what Terry did when serving his signature dish, King Prawn Rockafella at the outset of Hell’s Kitchen and that down to earth approach ensured his victory with the British public.

Additionally Terry has appeared extensively on BBC radio commenting on food issues of the day.

Rockafella - the haunt for celebrities

Terry was able to open up his gourmet restaurant ‘Rockafella’ in his home city of Newcastle upon Tyne thanks in great part, to the £250,000 contribution from his victory on Itv’s Hell’s Kitchen. The restaurant is typically English in its menu, reinforcing Terry’s passion for UK recipes and his fierce support of British dishes and home grown food is something he constantly advocates wherever he appears.

Food fit for a millionaire

Terry has recently relocated to the French Riviera where he provides the highest quality catering to satisfy the demanding requirements of the multi-millionaire yacht owners.

Wikizine is delighted to have Terry on board.